In the early 1950s, the only outcome that mattered in inguinal hernia repair was the recurrence or failure rate.  In how many patients did the hernia come back after a repair.

Obviously the only published results, or rather the only surgeons publishing their results, were those who were doing lots of hernia operations and had an ‘interest’.

Even the best results were around 5-8%, and in the vast majority of cases, unless they had a special interest, surgeons didn’t know what their recurrence rate was.

See this quote from Chester McVay, one of the great surgeons of that era.

“ … often a surgeon tells me he has no recurrences;  this simply means that he has not followed up his patients, since every surgeon has recurrences after hernia repair which are more and more numerous as the period of follow-up becomes longer”.

These are the results. 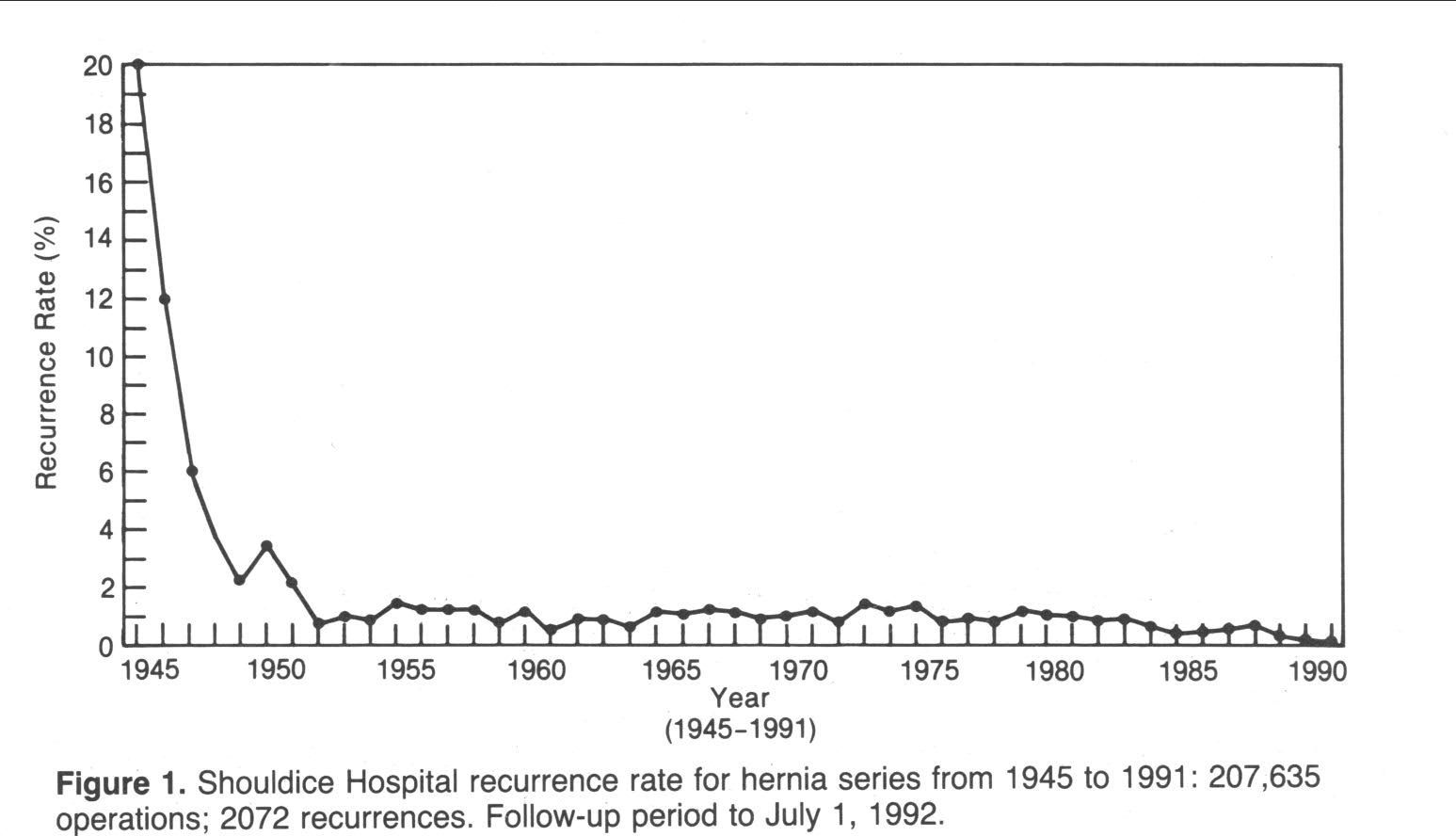 The initial recurrence rate was 20%.  That is to say that 1 in 5 patients the hernia recurred.  Awful.  As bad as the rest of the world.  But in those first 7 years Earl Shouldice and his small team of surgeons  were operating on 100s of patients, contacting and following them up,  and constantly modifying their technique.  Improvement though marginal gains, as we say nowadays.  This is what  E B Shouldice wrote in 2003 in ‘Surgical Clinics of North America’, talking about the history of the Clinic –

“it was in the initial 7 years, the “learning curve’ years, that problems were identified analysed and solved…”.

The surgeons at the Shouldice Clinic really wanted to know their results, so that they could identify problems and modify their technique accordingly.

Although Earl Shouldice presented his technique at a meeting of the Ontario Surgical Society in 1944, it wasn’t until 1953 that he was happy to publish his results and submit them to peer review and world scrutiny.

The results were outstanding.  The Shouldice Clinic was the ‘go to’ place for inguinal hernia repair, and very many doctors (worldwide), would travel there to get their hernia repaired.

And the the importance of the surgeon holds today for all types of repair.  Whether non-mesh or mesh, open or laparoscopic – it’s almost always going to be the surgeon.  It’s about volume, experience and follow-up.

You have to watch it being done.  You can’t learn from a book.  And there were no YouTube videos.  But it’s interesting that even the experts differed slightly – here is a quote from Welsh and Alexander, two Shouldice Clinic surgeons –

‘…there have been a considerable number of descriptions and interpretations of the repair by members of our staff…Some lack of consistency in these reports show that, even with excellent drawings, it is difficult to describe all the finer points of a procedure’

And at the end of the day it is the finer points that matter – to get consistently good outcomes in all cases.  As I said above,  it isn’t really the technique – it’s the surgeon